I Own Guinea Pigs!

For those of you who don't know, I have been a vet tech since moving to Idaho.  We see all types of animals at the hospital I work at.  One day, I just fell in love with a trio of guinea pigs that came in.  The owners told me they came from a local rescue, and I just knew I needed to get some of my own.

In March, I adopted Jack.  He was about 7 months old and just had the sweetest face!  After I got Jack and did some research, I learned that "an only guinea is a lonely guinea".  So, I needed to find Jack a friend.  While he was being boarded at the rescue in May, I had the woman watching him find him a friend.  Lenny was a little under a year old, and a perfect companion for Jack.  They are my two little cuties, and I am so glad I own them! 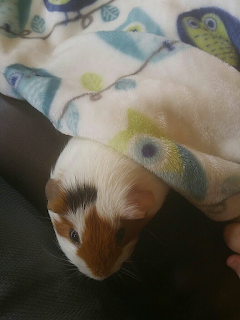 Jack hiding under a blanket! 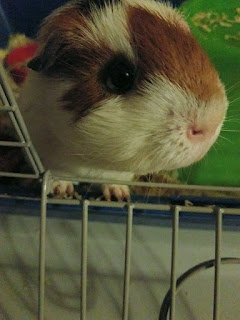 A nice close of up Jack LOL 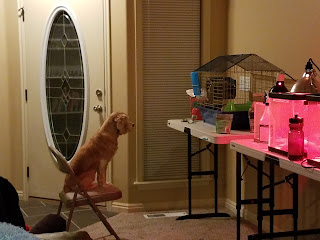 Hunter likes to sit on a chair and watch the guinea pigs play.  I think he secretly wants to join them, but just doesn't know how to be gentle. 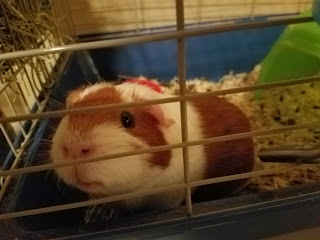 Another close up of Jack because I just think he is so photogenic! 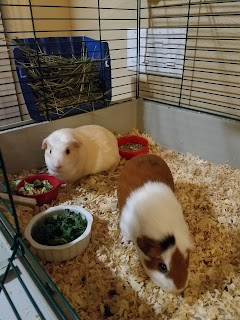 Jack and Lenny in their deluxe accommodations. 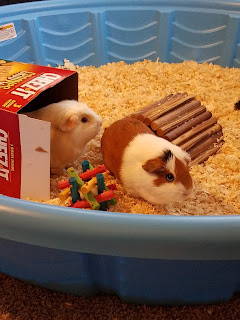 Jack and Lenny in their swimming pool for run around time. 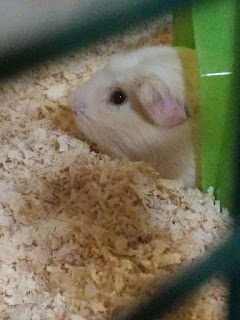 Lenny poking his head out of his hiding spot.  He is still really shy, and spends a lot of time under there.

Have you ever owned an "exotic pet" before?
Posted by Becca at 7:00 AM

Your piggies are so cute!! We need to get a companion for Chloe's pig, James. She wants a girl though... and I don't want babies! lol

I've had so many pets in my lifetime! Some were more unusual--a skunk, iguana, parrots, and--yes--even guinea pigs, which I never considered exotic--LOL! Guinea pigs are fun. They make the best noises. :)

That sure is a deluxe accomodation. Could it be that cute dog was dreaming about being small so he could join them?

Awww they are both so cute. My son had these for many years. They are scary when they escape though. You just never know where they will turn up.

Have a fabulous day. ☺

They sure have lots of room to play. Too bad the pup couldn't join in too, maybe after lots of watching.

They are so cute! I can't have any furry pets. :( If I could I'd have a hedgehog. Even one of those made me break out in dot hives when I held it for a few minutes. Their bellies are furry. My allergies suck big time!

I used to have a hamster and I loved her!! Enjoy your new pet!

They are so cute!

Debra She Who Seeks said...

Hi Becca, thanks for popping by my blog today! I've never owned a guinea pig but I've had a hamster and various rabbits in the past. Not sure if they count as exotic pets though!

JoAnn ( Scene Through My Eyes) said...

I've never had any pets except dogs and cats when our kids were growing up. Your little critters are very cute - but I'm happy to just enjoy other people's pets now.

They are really cute. For years I had a hedgehog named Norman.