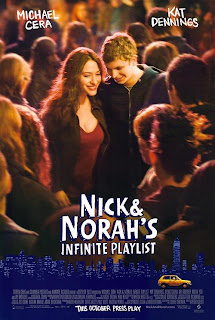 I have a 3-at-a-time Netflix membership, and currently am a bit behind on movies. I rented Nick and Norah's Infinite Playlist because I heard it was good and because I think Michael Cera is hilarious and cute in a totally nerdy sort of way.

Wow, what a great movie. I don't want to spoil it incase anyone hasn't seen it...but it takes place over one really long night! It's about a group of different high school kids and how they end up interacting with each other. The acting was really cute and everyone played their roles really well! I also used to go to a lot of music "shows" as a teenager so I can relate to the characters!

I would highly recommend it, but it might not be appropriate for kids lol
Posted by Becca at 7:13 PM

Being a grown adult, I wonder if I would enjoy a teenage movie?