We Tried Out Texas Roadhouse Tonight!

My dad and I have always enjoyed going out to dinner.  He said he wanted steak tonight.  I looked up a bunch of places on Yelp, but in the end we ended up going to Texas Roadhouse.  I really don't use Yelp for chains.  You know what you're going to get at a chain LOL

We've only been there once before.  I forgot they start you off with delicious bread with cinnamon butter stuff.  I was so excited that I dumped my butter over in the basket ugh

I ordered a bbq half chicken, rice, and salad for dinner.  My dad got a steak special with rice and a baked potato. 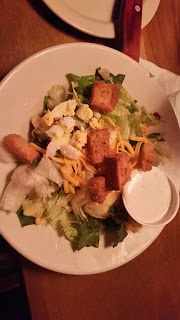 The salad came with the best ranch dressing! 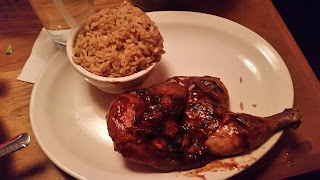 My plate looks so empty!  But there was so much chicken that I brought half home. 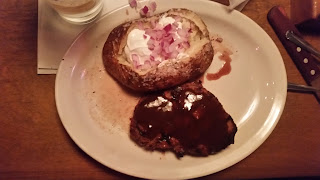 They forgot my dad's rice at first so he had an empty plate also. LOL

The waiters and waitresses danced twice while we were there.  My apologies for the poor video!

We both really enjoyed our dinners.  But since we just moved to a new city in a new state, I want to try every restaurant before I start going back to ones I've already been to.  Do you like going to the same restaurant over and over or trying new ones all the time?
Posted by Becca at 1:00 AM

We like to try out all kinds of new restaurants, whenever we go out. It's rare for us to repeat. We love Texas Roadhouse, though, and are going here in Miami next Wednesday for the first time since we moved here. The kids are so excited for the yummy rolls & butter! Glad you're back to blogging! :D

We don't eat out much. I think there is a Texas roadhouse here though.

This is so timely to me. Yesterday I went to a neighboring town to visit Target and saw a huge construction going up near there. I asked my Facebook friends what it was going to be and they said Texas Roadhouse! They told me the rolls are amazing.
Looks like I'm going to find out soon.

We don't eat out a lot so we tend to go back to the same restaurants. The thing I don't like about chains is the inconsistency from one location to another. When we lived in SD we LOVED Texas Roadhouse. It was one of our go to places to eat. Then when we moved to Texas, the location near our home we've tried twice and the food is SO salty (go figure, better food at the Texas restaurant in South Dakota than in Texas, LOL). So we haven't been back :( We really need to try another location and see if it's better. But here in the Dallas/Ft. Worth area there are so many restaurants, we've been trying some new ones out when we do eat out.

I am addicted to Yelp. Can't go anywhere without consulting it first!

I've never been there! Steakhouses are not the best restaurants to go to when you're a vegetarian! Although the dancing waiters and waitresses might be worth going... I could always just order a pop and fries!

Sounds like fun. My preference would be to try out new ones.. but if I find one I really love, I tend to return frequently.

We have some of those around here - I would like to try it.

I usually go to ones I know are good. Feel nervous trying new ones :)