Eggs In A Frame

Hmmm, I seem to write about eggs a fair amount.

Anyhow, some time last week Danny decided to ditch class (don't tell anyone) and came over to my house.  He came over right around dinner time, and we somehow got to talking about eggs in a frame.  He had never even heard of it before but thought it sounded cool and wanted me to make it for him.

Ummmm, I had never cooked it before!  I had no idea what to do LOL  Oh, for those of you who haven't had this before or call it something different, you cut a square in the middle of a piece of bread and fry an egg in that hole.

Below is my finished result....He made his own after he ate mine and his turned out way prettier hahaha 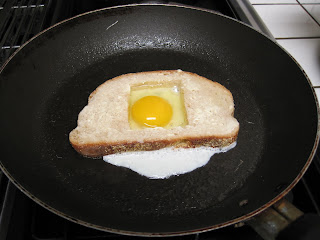 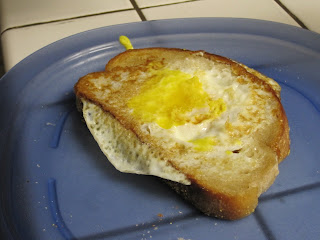 The finished result...not too bad for my first attempt!
Posted by Becca at 10:40 AM

I have never heard of eggs in a frame - I will have to try it out! Maybe you need thicker sliced bread?

I use a circle and call them "Hobo Eggs". I have also heard them called "One Eyed Jack's" and something about eggs in a basket. Yummy! I don't like yolks unless I dip bread in them so this is perfect!!

If you wanted to try the circle one I just use the lid to a cooking spray can and cut it out like a cookie :)

Yum! I love that stuff. I need to find a way to make it more diet friendly though.

That looks like fun and very creative! Would love to try it for breakfast! :)

Does that mean that men are better cooks? LOL. Over here they call that Egg on an Island. Go figure LOL Something that wont pass my lips EVER!!!

That looks so awesome! I don't eat eggs but Buzz does so now I have a great quick dinner idea for him lol Thanks!

Try it with egg bread, delicious.

That is such a unique way to cook eggs. I'm gonna have to try them out.

We call it a Hen's Nest and use a smaller circle hole .I just tear out a small hole and then placed the torn out piece over the egg as it cooks.I have also sprinkled it with cinnamon and suger for the kids.

Never heard of it either! I"m sure my hubby would love it though!

We call them egg in the bread (not so creative huh? lol) and they've been a family favorite since my great-grandma!