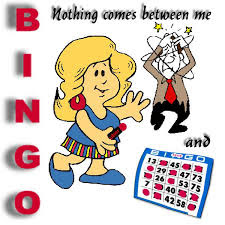 I finally got to do something I have been waiting to do for a long time -- play bingo in a bingo hall!  It was advertised as Buddy night.  Register with a buddy and you both win!  So we got our $20 together and were prepared for the advertised 20 games.  My friend didn't understand why I was so worried about getting there, because apparently he had seen the hall pretty empty before.

We got there at about 10 minutes to start time and it was packed!  The huge hall was filled with people.  It was really overwhelming.  But we found our way over to the cashier and got in line.  When it was our turn, we were lost again.  The lady asked a ton of questions and we had no idea what to answer.  We each paid $20 for the bingo cards, another $1.50 for a dauber (a tube with a sponge on the end to color the squares that are called), and paid $1 for something called a sock hop (I think that was the name).

We looked around for 2 seats together, and sat down by the most normal looking people we could find.  They could obviously tell we were confused, because they immediately began trying to help us.  4 different people started talking to us, and one woman grabbed my cards and started pulling them all apart.  Ack...what was she doing??????  Finally, she handed them back to me in piles.  Another person explained that one set was for warm-ups, two were for regular play (1 set was worth twice as much as the other set if you won) and the last set was for the cool down or whatever it was called.  So much for 12 games LOL  And to add to the confusion, they had bonus games every few games.

So we played all of the regular games, some of the bonus games, ate some food, met new people and looked at our clocks when it was all over --- 4 and a half hours later!!!!!!  What an insane night of bingo!

Oh Im so jealous!! I want to go! Did you win anything?

A few years ago I went pretty regularly with my sister. At first it was insane, trying to figure it all out. Always had fun playing.