The Other Daughter and Summer on Blossom Street (#12 and 13)

One of my resolutions last year was to read more books.  I accomplished that goal!  Unfortunately, I failed at the blogging side of things.  So now, I am going to write some reviews over the next few days or weeks of all of the books I read last year (there were more than 11, and my sidebar will be updated to reflect that). 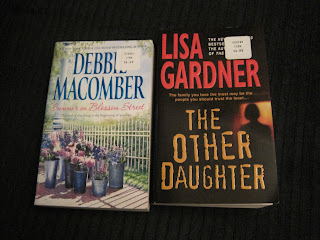 Since I don't remember what order I read in anymore, we'll call these #12 and #13.
I just finished "The Other Daughter" by Lisa Gardner on the 30th or 31st.  It was an amazing book, and only took me a few days to read.  It revolves around a woman around my age named Melanie Stokes.  She was adopted by a rich family who took really good care of her.  And then a reporter shows up and tells her about everything he dug up on her past.  The book gets really intense from there.  The cast of characters is really well described.  I felt like I knew each and every one of them.  I was happy when they were happy, but felt their pain also.  I don't want to spoil anything for anyone, but I never saw the ending coming!  Very well written!
"Summer on Blossom Street" by Debbie Macomber was a must read for me.  I love Debbie Macomber and the Blossom Street series is 1 of my 2 favorite series by her.  The book revolves around a few key characters.  Lydia Goetz owns a yarn shops and always offers fun classes.  She is married to a man named Brad and her sister Margaret also works at the yarn shop.  Phoebe Rylander was new this book and had just broken up with her fiancee.  Bryan "Hutch" Hutchinson is also a new character.  He and his family own a chocolate company and he is very stressed over his job.  Alix Turner is a regular.  She used to be troubled but now works at a bakery and is married to a youth pastor.  Anne Marie Roche owns a bookshop and has an adopted daughter named Ellen.  While there are some other characters in the book, these are the main ones.  It's so sweet to see how much knitting does for these people.  These books make me wonder if people from small towns really are that nice and close!  It sounds so amazing!  This series is great because you don't have to read it from the beginning to understand what is going on.  I did though! hehe
Posted by Becca at 12:03 AM

I'm adding both of these to my list! Thanks for the reviews. Happy New Year!