I had never been to California Adventure Land before.  I guess it has gotten negative reviews, but I thought it was really cool!!!!  They have 5 different areas of the park, 4 of which have rides, attractions, etc.  Because we got to the park before it opened, we got to go on everything we wanted to!

In the Hollywood Pictures Backlot area, we went on Monsters, Inc. Mike & Sulley to the Rescue!, The Twilight Zone Tower of Terror and watched Muppet Vision 3D.  Monsters, Inc is a really cute ride where you sit in a car and kind of go through a movie-themed ride.  The Tower of Terror is an awesome thrill ride, and we were in line with an adorable little boy lol.  Muppet Vision 3D is a really cute 3D movie. 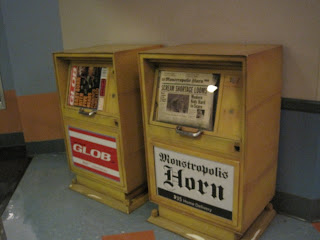 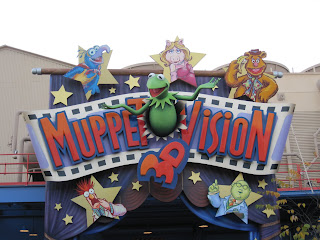 The entrance to the Muppet movie 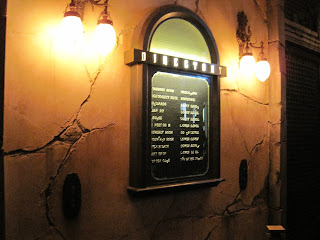 A lobby picture from Tower of Terror

Sunshine Plaza is like Main Street in Disneyland, so there isn't anything blog-worthy there.  We also didn't go to A Bug's Land at all since we weren't with little kids (although we probably should have gone just to check it out).

On Paradise Pier, we went on Toy Story Midway Mania!, California Screamin', Mickey's Fun Wheel and Mulholland Madness.  My mom and aunt went on Maliboomer and my cousin and her friend went on Golden Zephyr.  Toy Story really is probably the best ride there, like everyone says!  You ride through various arcade games, racking up points as you go.  California Screamin' is a huge roller coaster with only one loop that is tons of fun!  Maliboomer got good reviews because you just shoot up to the top, as opposed to inching up.  Mickey's Fun Wheel was a cute Ferris Wheel, and we chose the non-moving car.  You get a great view from the top of it!  Unfortunately, I don't remember much about Mulholland Madness except for it being a smaller roller coaster.  My cousin and her friend enjoyed Golden Zephyr, but it isn't a huge thrill ride (you just circle in rocket ships) LOL.  We also ate at Pizza Oom Mow Mow here, and the food was standard Disney pizza and pasta. 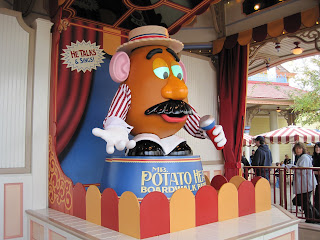 The talking Mr. Potato Head while waiting for the Toy Story ride 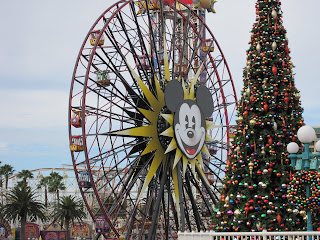 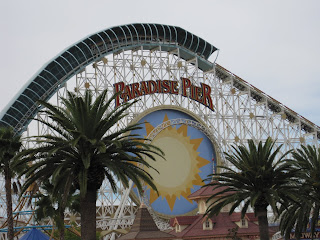 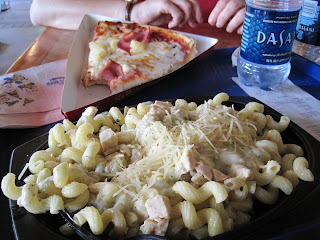 My chicken pasta lunch and my mom's one-bite missing pizza 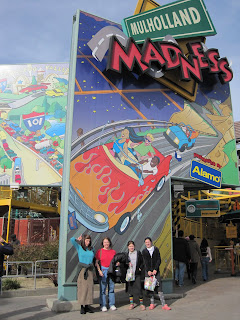 A cute pic of my mom, aunt, cousin's friend and cousin outside of Mulholland Madness 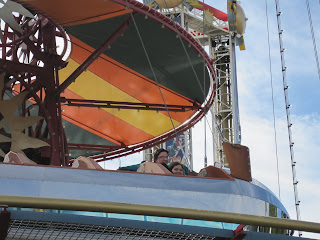 My cousin and her friend on Golden Zephyr

We only went on one "ride" in the Golden State Area  and that was Soarin' Over California.  It was really cool after I got over my initial motion-sickness.  You are strapped into a seat and it is literally like you are soaring over all of California's cool landmarks.  We also went to the Mission Tortilla Factory where you get to watch them make tortillas...and eat a hot one at the end!  And we went to the Boudin Bakery, where you get to take a tour of them making Sourdough bread.  You also get to try two slices! 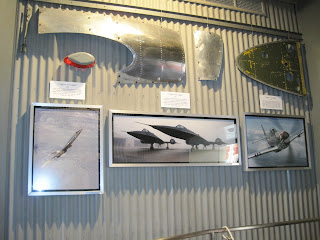 Pictures of airplines in the "line" or Soarin' Over California 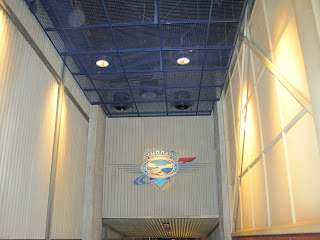 The entrance into Soarin' Over California 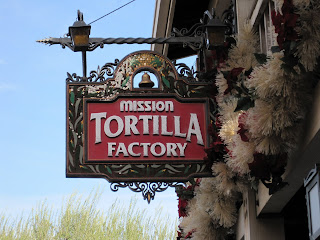 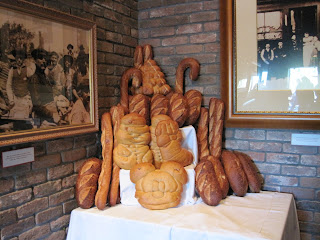 Hope everyone has enjoyed my California Adventure photos.  I will put up the Disney ones tomorrow...but there aren't as many since I have been there so many times!

Maybe not enough rides is why people give bad reviews. Looks like a great place to go :)

I love CA Adventure as well. It is not as busy as DL so we enjoy waling around and meeting characters. My daughters both LOVE the Playhouse Disney Live show.