Yay, restaurant #6! I am still chugging along, working on getting my card punched as many times as possible.. Last night, we decided to try a restaurant that opened a few months ago - Pastavino in Camino Real in Goleta. The Axxess deal was buy one entree, get one free. We saved $10!!!

Pastavino has a few appetizers, salads, sandwiches, pizzas, pastas and some various entrees. I ordered a pesto chicken pizza (hold the onions) and my dad ordered a pastrami sandwich and salad.

The food was delicious...but I have to comment on the service.  When we got there, we were told it would be a 20 minute wait.  We were seated in about 10 which was cool.  And then we sat there.....finally the hostess brought us some water.  And then we sat some more...and the other hostess finally brought us some garlic bread (It was really good and really garlic-y).  And then....after a while a hostess came back to see if we wanted more bread...and I tried really nicely to ask if we could just order.  And then....after some time someone came and took our order, but we couldn't figure out who he was since his outfit didn't match anyone else's.  After we ordered, our food was there super quickly!  And after I pulled out my camera to take pictures of our food, we suddenly had many people asking if everything was okay, offering more bread and water, etc.

So while the food was outstanding, I will have to try the restaurant again to give the service another chance.  The hostesses were really busting their butts, but it seemed like no one else was! 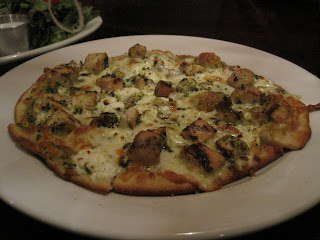 My delicious chicken pesto pizza...look at the huge chunks of chicken! My dad's pastrami sandwich...and my Axxess card conveniently got into the picture too.


I also want to be clear that I bought the Axxess Book on my own and went to the restaurant on my own. I received nothing from any mentioned company.
Posted by Becca at 12:01 AM

Now this looks like a great place to eat. Sounds just wonderful :)

When I finally get out to Santa Barbara, I will have to try Pastavinos!!