I have been going to Disneyland at least once a year (on average) since I can remember.  Ah the joys of growing up in Southern California.  This last trip though was one of the only times I have been without my grandparents - and able to zip around the park!  We got to do almost everything we wanted to, and even did some things twice!  (The only things we really missed were some character photos, and some rides that aren't our favorites).

In New Orleans Square, we went on Haunted Mansion Holiday and Pirates of the Caribbean.  We did both of these during the parade so the lines were really short!  I love how much they change Haunted Mansion at this time of year...my mom swears she had never seen it before but I really thought we had.  We missed the Disneyland Railroad, but will try to go on it next time! 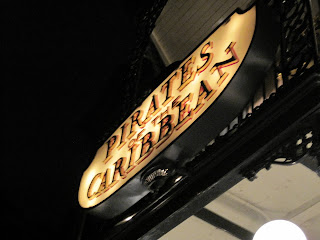 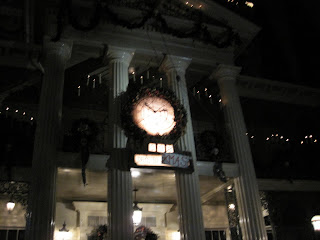 The front of Haunted Mansion
In Frontierland, we rode Big Thunder Mountain Railroad.  We did it once at night and once during the day.  This was by far my mom's favorite ride! 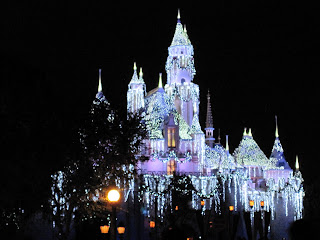 A random picture of Sleeping Beauty's Castle lit up - because that I don't remember ever seeing!
In Critter Country, we rode Splash Mountain (wow you really get drenched in the front seat) and The Many Adventures of Winnie the Pooh (twice hehehe).  We also ate at Hungry Bear Restaurant (which really wasn't anything special). 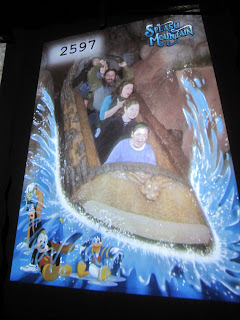 The picture of a picture I took of us on Splash Mountain
Moving on to Adventureland, we rode Indiana Jones, also twice.  This line really taught us the value of the Fast Pass.  Those things are amazing and I highly recommend them!!!  We missed out on the Jungle Cruise here, but will be sure to go on it on one of our next trips.
My favorite "area" was Mickey's Toontown, because I had never really been there before.  When they were first building it, I was there for a second, but there wasn't even really anything there.  This time we got to go on Gadget's Go Coaster (a fun little roller coaster but OMG the most annoying lady in the world was behind us in line), Roger Rabbit's Car Toon Spin (a cute ride but we spent the whole time trying NOT to let our car spin) and we went into Minnie and Mickey's houses. 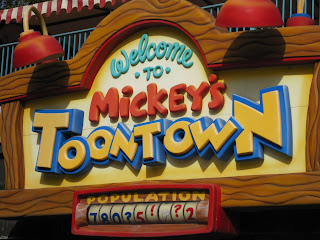 The entrance to Toontown...I love the spinning population sign 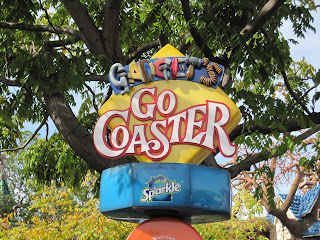 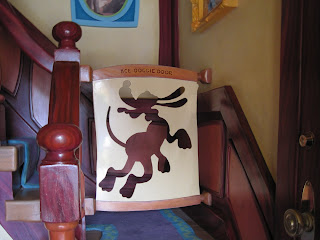 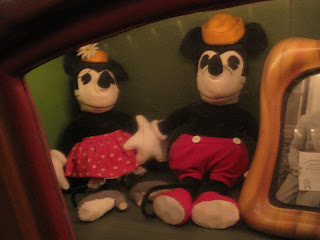 Super old Mickey and Minnie dolls...they barely resemble what we think of today! 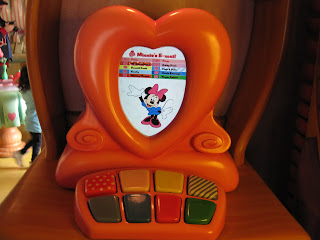 Minnie's emails in her house hehehe 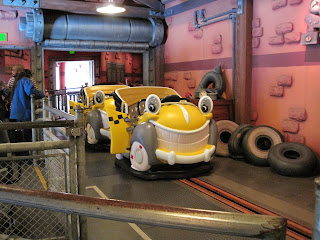 Our car on the Rogert Rabbit ride
The next land on the map is Tomorrowland.  We always seem to spend a lot of time there, which is quite okay by me!  We tried out Buzz Lightyear Astro Blasters (like Toy Story Mania over at California Adventure...but not as cool), Finding Nemo Submarine Voyage (this was also new to us, I liked it way more than my mom did!), Space Mountain (we used our Fast Pass for this and it rocked!!!) and we watched "Honey, I Shrunk the Audience".  We didn't do Autopia cuz no one would go on with me :(  We also didn't go into the Innoventions building because we have done that before and it doesn't change much (and I sprained my ankle in there the last time lol).  We also, as usual, ate at Redd Rockett's Pizza Port. 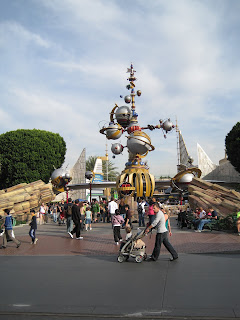 The cool "thingie" at the entrance to Tomorrowland 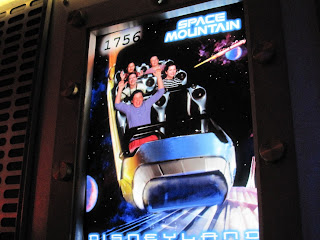 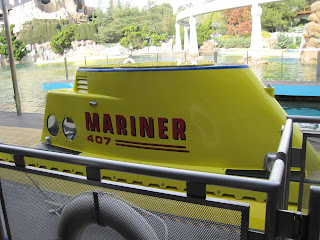 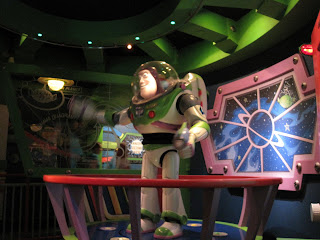 Talking Buzz Lightyear in his ride 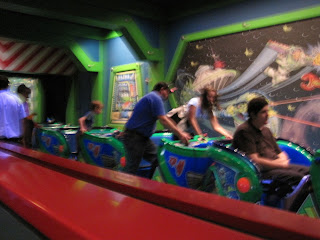 The cars on the Buzz Lightyear ride (I don't know any of those people)
And lastly, Fantasyland.  I love Fantasyland, but often the lines are sooooo long that we skip over many of the rides.  But this time, we did all but one ride that we wanted to, but we did skip the attractions.  We went on Alice in Wonderland, It's a Small World Holiday, Matterhorn Bobsleds, Mr. Toad's Wild Ride, Peter Pan's Flight, Pinocchio's Daring Hourney, Snow White's Scary Adventures and we did the Sleeping Beauty Castle Walkthrough (for the first time ever).  I almost had a heart attack in line for It's a Small World.  My mom asked me to take pictures of all of the "tree animals" (trees shaped into animals).  As I was doing this, an employee tapped me on the shoulder and said, "Come with Me".  I just looked at my mom, she told me I had to go (even though I was petrified) and then thankfully the lady said, "Come, I'm opening up a new line".  My mom and I both thought I was going to Disney jail!!!!  I love how pretty all of the rides are in Fantasyland!  Next time, I hope to go on the Storybook Land Canal Boats (we rarely get to go on those), walk through Pixie Hollow (to meet Tinkerbell) and go through the Disney Princess Fantasy Faire. 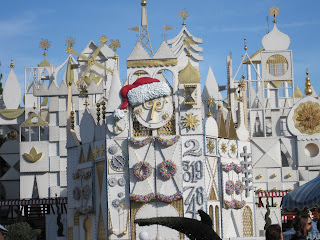 It's a Small World with an X-Mas hat 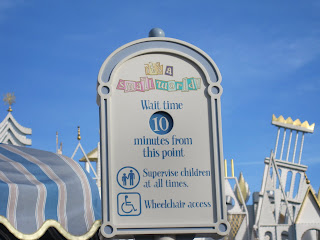 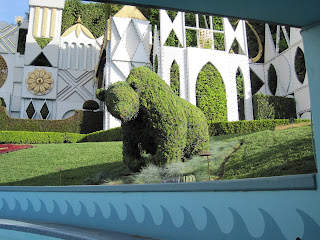 One of the animal trees that I thought doomed me! 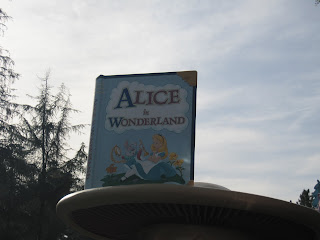 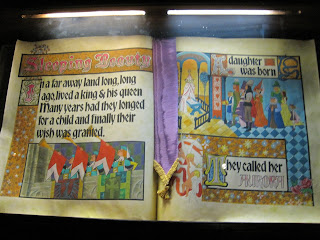 The first page in the Sleeping Beauty walkthrough
I hope you all have enjoyed reading about my Disney adventures as much as I enjoyed posting about them.
Posted by Becca at 10:30 AM

Wow! That looks like so much fun. I haven't been to Disney in ages. Maybe the next time I head out west!!!

Thanks for visiting my blog!

Too too fun! I have only been to Disneyland once, but hope to go again, they were just building California Adventure at the time.

We were in Disney World last December and the Castle Lit Up is quite the site to see isn't it?!

So glad you had a great time, and thanks for visiting my blog!

You are a lucky duck, lady! Thanks for sharing. It was fun.

p.s. Have fun at your friend's house for New Year's Eve!

Gosh, looking at your pics sure makes me miss D-land! I used to have an annual pass when I lived only 30 minutes away.

Thanks for sharing this. What a wonderful time. I so love Disneyland. It's been forever since I've been there. Gonna have to change that :)

Hope you used your Axxess Card when you bought your tickets!

Wow neat! This is a really great site! I am wondering if anyone else has come across something
exactly the same in the past? Keep up the great work!